» Count to a MILLION!

Top posters
Top posting users this week
Roleplay Info
Time: Noon Season: Late Summer Temperature: 78 F, 23 C Weather: The sky is blue and clear. Roleplay: Silver met a few others, and after exploring and hunting together as a pack, another wolf, named Arrow, appears at the castle.
Who is online?
In total there is 1 user online :: 0 Registered, 0 Hidden and 1 Guest

All of you have been noticing that the roleplay has gotten slow, almost to the point of dying completely, yes? Well I'm hoping to introduce a plot to get activity back up. It won't involve much action or fighting in the posts, but I think it will add a very interesting aspect to the roleplay. Allow me to explain.

There are spirits who live in the land of Ishabar, specifically dwelling in Teleko Cave, a landmark in the Gravindom section of the land. Each of the spirits will begin to call out to one specific wolf, bringing them all to travel across the land and into Teleko Cave. Once there, the cave branches out in several different tunnels. Each wolf will be called down a different path. Once they reach the end of the tunnel they were drawn into, they come upon a crystal. Inside that crystal is the spirit that had called out to them. Each spirit will associate with the wolf they called out to, and they each have different names and types of crystals. Within each crystal, the spirit possesses a different power, which they will lend to their wolf in times of need. After speaking a few words to their wolf, the spirits talk of a trial. Each wolf, on their way back to the entrance of the cave, will face some of their greatest fears or weaknesses. If they can make it back out, then it is proven to the spirits that they are indeed one of the wolves transported to Ishabar to liberate the land of the dark magic lurking within it.


Okay, so I kind of threw this together in a few minutes, and I'm still not sure about which spirits go with which crystal and which power yet either. However, when the time comes for the plot, I will write all three elements down on a single scrap of paper, do so for each wolf, then chuck them in a hat, and draw one out for each wolf. I'm excited, and I hope you are too. If you have any questions or comments, post below ^^

YES! I can't wait x3
I might eliminate Accirrah there... Because he is one of my worst creations... But I might not xP 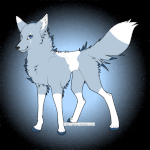